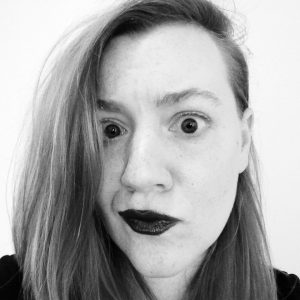 Sally Wolchyn-Raab is an interdisciplinary artist, Artist-Run Centre nerd and critical writer working with intersectional feminist and community-based approaches to science, body and space. She merges a range of mediums from drawing, printmaking, craft, performance and electronics to produce works that examine our historic and societal relationships to the natural world using the human body as context and foreground. As an emerging critical writer she examines fellow artists, exhibitions and institutions through the lens of feminism and demystification – occasionally favoring poetic and conversational vocabularies over a cerebral conceptual art lexicon.

Sally was raised in the ancestral Lenapehoking territory in Manayunk (Philadelphia) and holds Jewish-American and settler heritage. Sally received a BFA in drawing from ACAD in 2010, and lives in K’jipuktuk (Halifax) where she works as the Artistic Director of Eyelevel Artist-Run Centre & Bookstore, sits on the Editorial Committee of Visual Arts News and is the President of Atlantis: the Association of Artist-Run Centres from the Atlantic.

Her work with Artist-Run Centres started as a founding board member of Calgary’s Pith Gallery and Studios in 2011, and she has since worked with Centre for Art Tapes in Halifax, Untitled Art Society in Calgary, M:ST Performative Art Festival in southern Alberta and the Alberta Association of Artist Run Centres. Her work has been published and exhibited in Canada and the United States including Visual Arts News (Atlantic Canada), HOAX Magazine (San Francisco), LUMA quarterly (Southern Alberta), Woman Made Gallery (Chicago), Nocturne Art At Night (Halifax), Nuit Blanche Edmonton, and the 2012 Calgary Biennial.