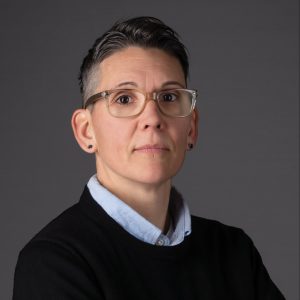 Lorraine Albert is an interdisciplinary artist, educator, designer and freelancer whose work is rooted in conceptual ideation & problem-solving, specializing in brainstorming, branding and corporate identities. She is an attentive listener who has a knack for “pulling threads,” linking ideas, and making connections. Lorraine has a diploma in Graphic Design from Dawson College, a Bachelor of Fine Art from Concordia University and a Masters of Fine Art from NSCAD University. She has worked as a designer in Brisbane, AUS, as well as Vancouver, Montréal, and Halifax.

Lorraine has been a panelist at the International Council of Fine Arts Deans (ICFAD) conference in Halifax and presented a paper on alternative art pedagogies at the Universities Art Association of Canada (UAAC) conference in Banff, AB. She has co-facilitated a round-table addressing Land & Treaties at UAAC in Waterloo, ON. Lorraine has been a scholar at the Centre for Art Tapes (Halifax), and most recently participated in the Plug-In Institute of Contemporary Art Summer Session on Indigenous Architecture in Winnipeg, MB. Her work has appeared in festivals, venues, galleries, and at various sites in Canada and Australia, including “Steps Forward,” a permanent public art installation on the Skyline Trail in the Cape Breton Highlands National Park.

With a unique perspective in art and design, Lorraine has established herself in Halifax as a freelance Media Manager & Designer, working with local businesses and universities. She is currently a Social Media Coordinator & Design Researcher at Fathom Studio in Dartmouth, NS.