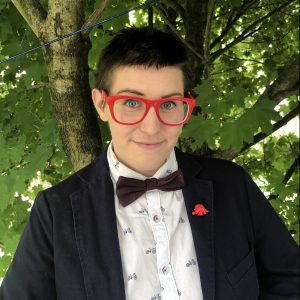 Colleen is a multi-disciplinary freelance artist based in Kjipuktuk/Halifax. Former Managing Director of 2b theatre company and Chair of the Board of the Bus Stop Theatre Co-op, Colleen is the current Artistic Producer of the Villains Theatre. Winner of the Bhayana Invisible Champion Award and the Halifax Mayor’s Award for Emerging Theatre Artist, Colleen’s work in comics has been nominated for national awards, their short animated films have featured in festivals on four continents, and they have worked as an illustrator and graphic designer for over a decade. A graduate of Emily Carr University, Colleen’s training in theatre has largely been acquired through trying things, making mistakes, and attempting to learn from those mistakes.

SAM operates in Mi’kma’ki, the ancestral and unceded territory of the Mi’kmaq People. This territory is covered by the “Treaties of Peace and Friendship,” which Mi’kmaq and Wolastoqiyik (Maliseet) people first signed with the British Crown in 1725. The treaties did not deal with the surrender of lands and resources but recognized Mi’kmaq and Wolastoqiyik (Maliseet) title and established the rules for what was to be an ongoing relationship between nations.